Crime Stoppers is based on the simple principle that for every crime committed, someone other than the criminal has information that might solve it. Crime Stoppers is the brainchild of a Canadian-born Albuquerque, New Mexico police detective, Greg MacAleese. MacAleese was assigned to investigate a 1976 robbery gone afoul that resulted in the senseless shooting of a young, part-time employee of a gas station. Frustrated by the lack of a solid investigative lead in this case, MacAleese recognized there were two reasons the public did not communicate information concerning crime to authorities. These two prohibitions were: a valid fear of reprisal and pervasive public apathy. This crime occurred at dusk, in a well- travelled neighbourhood in Albuquerque, leading MacAleese to believe that someone, other than the killers, must have knowledge concerning this homicide.

He reasoned that if he were to offer a cash reward to overcome the apathy, while guaranteeing anonymity to protect against reprisal, he might be able to solve this case. He contacted the local media, staged an on-site televised re-enactment of the crime and offered a cash reward from his own pocket for information that led to an arrest of the persons responsible. He set up a secure “tips” line and invited the public, after viewing the re-enactment, to call with information. He received a number of calls and the case was solved.

The Crime Stoppers triad was forged when MacAleese approached several members of the community to serve on a governing board of directors to administer the fledgling program and raise the necessary charitable funding. The concept of the community, the media and the police working together to solve crime spread rapidly to the point where there are Crime Stoppers programs across Canada, the United States, Britain, South Africa, Guam and Australia.

In Ontario, there are 39 programs, linked together by a national toll-free Crime Stoppers telephone number (1-800-222-8477 or TIPS), covering the entire geography of our province. The impact of this crime fighting network in Ontario has been astounding! Since the original Ontario program commenced operation in 1983 (and in London, Elgin & Middlesex in 1987) to the end of 1999, Crime Stoppers tips have led to the arrest of 50,000 persons and the recovery of $375 million in stolen property and seized illicit narcotics.

As a member of Crime Stoppers International, our local program has a global perspective in the fight against crime and terrorism. In 2006, Crime Stoppers International was granted “Special Consultative Status” by the Economic and Social Council of the United Nations, having been recognized as providing an important tool in combating the increasing world-wide criminal and terrorist activities.

Charitable Registration #11902-3711 RR0001 Crime affects everyone. Crime Stoppers programs do not receive funding from any government sources. We rely entirely on fundraising initiatives to support and drive our program. Community leaders, the business community and individual citizens can assist 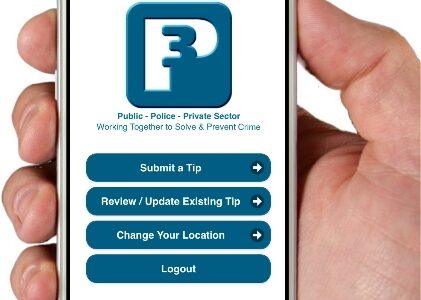 P3 Tips Mobile App Now you can submit anonymous tips from our free and secure mobile app.  Search your App Store for “P3 Tips” or click the appropriate link below.

Please take the time to remember the heroes that f

Day Of Heroes 2022 was a hulk-smashing success wit

PIZZA HUT DAY OF HEROES IS BACK! Join us for Piz